Starting SME Business in ASEAN Nations. From January 2016, ASEAN became Asean Economic Community (AEC). As a regional network of 10 member nations governed by different political systems, it has a population of more than 600 million people who practice a multitude of religions and speak over 70 languages and dialects. At present, there are three constitutional monarchies (Malaysia, Cambodia, and Thailand), three republics (Indonesia, the Philippines, and Singapore), two communist states (Laos and Vietnam), one constitutional sultanate (Brunei) and a former military junta (Myanmar). 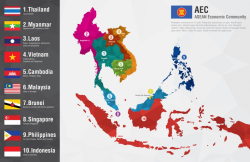 With a combined gross domestic product of US$2.4 trillion, ASEAN ranks today as the world’s seventh-largest economy (if it were a country). Demographic factors, such as proximity to economic giants, and a combined population representing around 9% of the world’s population, have contributed to making ASEAN an attractive destination for foreign investment. Regional integration and harmonization efforts by ASEAN leaders, and notably the creation of a single ASEAN market in 2015, are also expected to put ASEAN on a steady and sustained growth path. However, for companies looking to enter the “ASEAN Economic Community” market, it is still vital to understand that ASEAN / AEC cannot be treated as ‘one big country’, but as ten vastly different markets at varying levels of maturity.